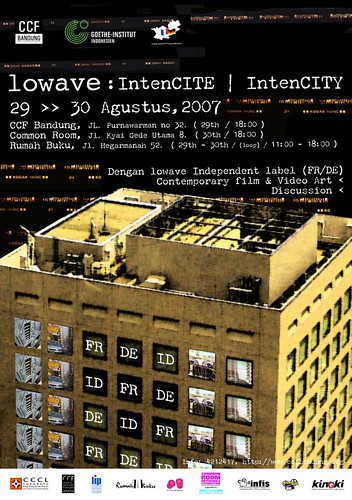 IntenCity/ LOWAVE Video Art & Experimental Cinema Screening presenting works from 10 artists who came from 9 countries, which working in the context of urban situation. IntenCity is a compilation of works that is never been published before and offering a new perspective on cityscape and its artistic perception on video art and experimental cinema.

The program is being prepared by LOWAVE, an independent distribution label that offers a new approach in working on urban issues in the context of contemporary cinematography. Some films that is included in this compilation are reflecting a rich and original view from its respective artists, mostly collected in the past three years from various sources and compilation such as City2City, Visions Urbaines, HC Gilje: Cityscapes, and Valerie Pavia.

Within this hybrid mix, most of the artists explores their work from the stream of crowded human interaction, modern buildings and cityscape. Working with fragment of pictures and noises, most of artists tries to reconstruct without neglecting narrative aspect in city life, with realistic, poetic, and Utopian views.

LOWAVE is an independent DVD label with the objective of discovering and promoting contemporary film and video art. Its ambition is to create a new marketplace for the work of cutting-edge artists and filmmakers, under recognized by the traditional distribution channels, by making them accessible to the public via the DVD format. With DVD, experimental film can finally find an audience beyond the film festival circuit. (More info please visit: www.lowave.com).

Besides showing some works from LOWAVE artists, this program is also equipped with special screening that is coordinated by VideoBabes, which will show 10 works from local artists that presents diverse perception on cityscape based on their own perspective. From this compilation, VideoBabes invite us to explores various form of cityscape through rich collection of building blocks and personal memory, besides reflection of urban souls that is appear in public toilets and TV screen, which stuck in the corner of city space. While exploring a distinct form of urban surroundings, this compilation also offers an intimate approach in understanding city life from its inhabitants.

Prilla Tania / A Short Story from Mom and Me
Rizaldi Fakhrudin / One Creative Way to Live in a Creative City
M. Akbar / My Little Corner of the World
oQ Adiredja / Me vs. Angkot
Yusuf Ismail / Flushed Memory
Muhammad Reggie Aquara / Album: Traveling Without Moving
Yusuf Ismail / I hate to be in the middle of the crowd during Saturday night in Dago street
Ariani Darmawan / City of Desire
R. E. Hartanto / City Series No. 2
Andi Bini Fitriani / Urban Puppet

In conjunction with screening program, there will be public discussion that is presenting two artists from LOWAVE:

Silke Schmickl
Silke Schmickl was born in Germany in 1974. She studied Art History and Intercultural Communications in Munich and in Paris where she completed her diploma at the University of Paris (Sourbonne) in 2001. She’s been a researcher at the German Center for Art History in Paris since 2000. She has published a book on Museum Photographs by Thomas Struth. In 2002, she co-founded LOWAVE where she is responsible for the conception and production of art projects as well as their distribution in partnership with international cultural organizations.

Thomas Lambert
Thomas Lambert was born in France in 1977. A film buff since his early days, he’s been exploring different technical aspects of cinema. He completed a degree in cinema in 2004. Since then he’s been working on a number of projects as cameraman, editor, and musician. He is responsible for DVD authoring and project managing the technical requirements of Lowave’s projects.

Public Discussion:
Presenting some artists from IntenCITY – LOWAVE and VideoBabes.

Sidebar
Start typing to see posts you are looking for.